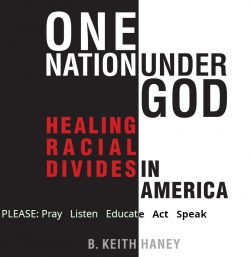 Grace to you, and peace, in Jesus’ name. Amen.

We’ve been on this journey looking at one nation under God. There are a lot of congregations across the United States that are doing this same study. It’s not just an LCMS thing. This study is being used all over America right now.

Looking back, remember what we’ve explored so far:

The first week we talked about how sin distorts who we are. It tears down the identity Jesus gave us. In Holy Baptism you are a new creation. Sin causes divisions among us. Prayer is the answer.

The second week, we talked about the real enemy. The real enemy is Satan. It is not our brothers and sisters in Christ, or our fellow citizens of America, even if they speak a different language or have a different skin color, or come from a different culture. We asked: Who is my neighbor? The distortion of sin causes us forget who our neighbors are. God calls us to a life that is interconnected with one another. Listening to each other is the answer.

Then we looked at discovering how we can stand in each other’s shoes. Working at understanding each other. We asked what God requires of us, and how we can achieve that only through Jesus’ life, death and resurrection. We can’t do it ourselves but through Jesus’ teaching, healing comes. Education is the answer.

Hundreds and hundreds of thousands of people died. There was every reason to have division, but that’s not what God tells us to do in His Holy Word. He says it is sin that distorts us into factions. Jesus says, “Bless those who curse you.1”

T his is a real struggle for us but it’s a struggle that is healed when we understand all of us fall under God’s condemnation, and all of us are saved by His grace through faith in Jesus Christ.2

Now we’re into week five and we are asking: What can I do about? it? It seems like such a big problem, and I can’t do anything about it.

We are defining ourselves, not as followers of Jesus, but defining ourselves by political organizations. Organizations that not all that long ago didn’t exist. The time will most certainly come when they won’t exist anymore. We should define ourselves as soldiers of the Cross, children of God, redeemed in the Blood of the Lamb, and called to be faithful to Him.

We have to realize, in these divisions we are experiencing, “white-America” can’t fix this problem for “black-America.” “Black-America” cannot fix this problem for “white-America.” It is only Jesus who can make the changes in the “We” and the “Me” that are necessary for healing to happen. That healing is only going to happen when we “love people to life” in Jesus, because Jesus changes everything. Even our so-called “racial” divides and our prejudice, our pre-judging.

‘Prejudice’ is a word we should define. What does this mean? It means to pre-judge. That means before you walk into the room you believe you already know what’s going to happen? Before you have a conversation you already know what I’m going to say or what I think. All prejudice is wrong. Regardless of the people group.

Pastor Keith Haney, who wrote the Bible study we’re working through, has some powerful words to say. I want to read some them to you because I want you to hear it directly from him. Here’s what he wrote:

In 2012, after the death of Trayvon Martin in Sanford, Florida, the “Black Lives Matter” movement began. Three women: Alicia Garza, Patrisse Cullors, and Opal Tometi, are credited with starting the movement. They claimed that after his death, Trayvon Martin was tried for his own murder, and his shooter, George Zimmerman, was not called to account for his crime. They claimed black lives are being targeted for destruction.

These claims reflect the distrust many African Americans feel toward this country. But they go even deeper—making the bold claim that white America is intentionally targeting black lives for destruction.

As an African-American Christian, I cannot condone this charge—it sounds like Satan’s slander. But it is another example of black Americans wrongly believing they cannot be prejudiced—and explains why they don’t see anything wrong with lumping all whites together and prejudging the intention of every white person.

That is just as wrong as white-America prejudging black-America or any other group.

White America hears this harsh accusation and is baffled—if not aggravated by it. It will admit that there may be a small minority of whites who wish for the destruction of black lives, maybe even a handful of police officers—but the vast majority of whites, politicians, and police officers are repulsed by the idea.

And the racial divide grows yet again. But I ask, can white-America understand that each police shooting of a black man simply reinforces what we black-Americans were taught as children—we can’t trust police officers; we need to be afraid of them? Like I said before, on the rare occasion when a law enforcement officer pulls me over, my heart races, I am on edge not knowing how this whole thing will turn out. I am convinced both parties feel this uneasiness, and it is a recipe for disaster. Two people, both on edge, both afraid of each other. The officer has a deadly weapon. I am defenseless.

Can you understand that? Can you stand in those shoes? Because that is the very real reality for a lot of our brothers and sisters in Christ. That is their life experience. He goes on to say:

We need to remember there are two sides of this racial divide— and both sides have real and valid concerns, alongside grave misunderstandings and distrust of those on the other side.3

Did you hear that? Can you believe anyone would actually think like that? Is that not painfully sad? These divisions are real, but based on lies and gossip. The question is: What can do we do about it?

Saint Paul has something powerful to say to the Philippians.

Do his words describe you? I hope so. So you’re not a cold-hearted knucklehead with no compassion, and you do have comfort from Jesus’ love. You have encouragement from belonging to Christ. You understand the Holy Spirit blesses and comforts us. Paul says:

complete my joy by being of the same mind, having the same love, being in full accord and of one mind.5

Do nothing from selfish ambition or conceit, but in humility count others more significant than yourselves.6

We’ve got to be thinking about the world in a different way, because that’s how Jesus thinks about it. Jesus is our Teacher and example. We must strive to have the same attitude as Jesus. Remember He is the one who came across the great chasm of our sin. He left His throne in Heaven because He thought you were worth it. He couldn’t imagine heaven without you. How can you imagine heaven without someone simple because the melanin content in their skin is different?

He prayed for you saying:

Let’s all commit ourselves to the Way, the Truth and the Life.

I do not ask for these only, but also for those who will believe in Me through the Word.8

On that day, over 2,000 years ago, at a place near Jerusalem, Jesus was praying for you. He prayed:

…that they may all be one, just as You, Father, are in Me, and I in You, that they also may be in Us, so that the world may believe that You have sent Me.9

Because when we show unity, the world can and will believe God is on the move. Jesus prays:

Father, I desire that they also …may be with Me where I am, to see My glory that You have given Me because You loved Me before the foundation of the world. O righteous Father, even though the world does not know You, I know You, and these know that You have sent Me. I made known to them Your name, and I will continue to make it known, that the love with which You have loved Me may be in them, and I in them.11

That is Jesus’ prayer for you.

That’s the hard part, but it is we who claim to be followers of Jesus. If we follow Him we cannot ignore Him, His Words, His prayer, or His example. We don’t have any other option. If we are Christians we are Christ-ians, Christ-people. We have put His name on us. He has put His mark on us. The world is watching. What will we show them?

Remember how He built the relationship across to divide with the Samaritan woman at the well,12 and how He dealt with lepers13 and the Romans,14 and all kinds of people that did not “deserve” His attention. They were not simply perceived as “those kind of people.” They really were “those kind of people.” Some of them really were sinners out loud on purpose. Yet Jesus loved them anyway. Could we be so arrogant we would think we are above Jesus and His way? Would we wallow in the wonder of sin, defying Jesus’ example? Building relationships is the answer. The steps are easy to write down, but harder to actually implement.

One of the easiest places to do that, here at St. John’s, is at the Sudanese service that happens right here. They are some of the most gracious people. They are so appreciative in being able to use our space to worship. We share with them a common doctrine and confession of faith. We share with them the important goal of introducing people to Jesus because Jesus changes everything. What would be different if:

It starts by remembering Jesus did that for us? We didn’t deserve it. We killed him. Who has been that evil to you? He crossed over the divide of sin, into our world, because He wanted to build that relationship with us. Will you P.L.E.A.S.E.: pray, listen, educate, act and speak in Jesus’ name? Next week we will learn what to expect.