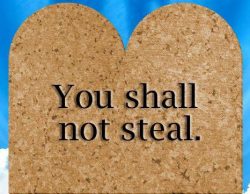 (Please turn in your Catechism to page 105 for the Seventh Commandment and Matthew 6 in your Bibles.)

As we make our way through this series on the 10 Commandments, I am reminded of the surprise I feel at God’s concern for the little things in our life. I doubt anyone is very surprise to hear God wants us to ‘have no other gods’ and that ‘we not misuse His name,’ and ‘honor the Sabbath day by keeping it holy.’ These are the kinds things to which everyone expects God to be concerned.

Does it surprise you that the almighty God, the King of Kings and Lord of Lords, is concerned about things like your boat, golf clubs, and fishing pole, your clothes, jewelry and car, your smart phone and your toys?

Does it surprise you that this commandment is a whole lot more all encompassing than we might at first think it to be, or maybe even than we would like it to be? That is because it means God is involved in my stuff, and my neighbor’s stuff. Maybe we’d like to keep our religion on a much more ‘spiritual’ level. Maybe we want our possessions to be exempt from anything to do with matters of faith.

If you read ancient confessional writings, or maybe even if you don’t, you will have heard of a book titled “Confessions,” written by St. Augustine. There he writes about how shocked he was to discover he was by nature sinful and unclean. He realized this one day when he, and few of his friends, stole a few pears from someone’s tree. When he thought about what he had done he realized that he wasn’t hungry, and the pear tree in his own back yard had much nicer pears on it.

This is what he said:

I had a desire to commit robbery, and did so, compelled to it by neither hunger nor poverty but through a contempt for doing well and a strong impulse to iniquity. I pilfered something which I already had in sufficient measure, and of much better quality. I did not desire to enjoy what I stole but only the theft and the sin itself.

As I looked through many of the places where stealing is mentioned in the Bible, I was surprised that there was not one case of someone who stole something for the sake of survival. I’m not saying the Bible condones stealing if it’s a matter of survival. It’s just that it’s not really what this Commandment, or God’s Word describes. If it was, this Commandment would probably not apply to most of us.

This Commandment is about “kleptomania.” The Greek word for stealing is klepto, to steal for no reason, or to steal for the pleasure of stealing, which as St. Augustine discovered applies to all of us more than we might think.

“You shall not steal.” As he does so well, Luther captures both sides of this Commandment in his explanation:

We should fear and love God so that we do not take our neighbor’s money or possessions, or get them in any dishonest way, but help him to improve and protect his possessions and income.

In the Large Catechism Luther says ‘stealing is taking advantage of our neighbor to his loss in any sort of dealing.’ “Any sort of dealing.” That covers a lot of ground, doesn’t it? That certainly covers criminal acts of theft. It also covers the daily dealings in which we engage with others that may be perfectly acceptable from a legal perspective, but that clearly ‘take advantage of our neighbor to his loss.’ It also covers those intangible things that are often more precious and more damaging when lost. Like when gossiping words are repeated and reputations are stolen.

When you take possessions, be they material things like money, or even the pen at the checkout counter, or intangible things like reputation and trust, you always inflict pain. Sometimes a little, sometimes a lot, but it always builds mistrust and doubt.

With a definition of stealing as broad as that, Luther goes on to say in his Large Catechism:

“if all who are thieves, but do not want to admit it, were strung up on the gallows, the world would soon be emptied, and there would not be enough gallows and hangmen.”

So on the one hand we hear the Old Testament prophets rail against the merchants who use ‘false scales.’ The Bible says:

Dishonest scales are disgusting to the Lord,
but accurate weights are pleasing to Him.1

God condemns dishonest business tactics be they in commerce or common decency. He is delighted with something as simple as an honest scale or honest speech.

In Old Testament times when farmers harvested their crop, God commanded they were not to go back over their fields a second time, to collect what they didn’t get on the first harvest. The ‘gleanings’ were to be left for the poor. In consideration for the poor he should allow them to pickup as much as they could carry, so that they could ‘improve and protect their possessions.’

It was not to hand out free money or things, like one gives to a beggar, which denigrates the receiver, but to allow them to opportunity to work to provide for himself and his family, and those in his care. Whether it be a purchase, or a day’s work, or a ‘deal,’ or the commerce of conversation, stealing is always stealing. As St. Augustine said it is too often done, not for personal gain as much as simply because we can. Just because it is easy to take, doesn’t mean you should take it. Be it: money, material, reputation or trust, it is always damaging to the one who losses.

With that understanding we might not really want God involved in our ‘dealings’ as much as He is. Faith like that threatens to interfere with the way we live and deal with others. In truth the warnings throughout the Bible on this matter are actually some of the most severe. In searching through the Scriptures, you’ll discover something a bit shocking. Stealing is so offensive to God that thieves are mentioned as those who will not inherit the Kingdom of God. The Bible says:

“…thieves, those who are greedy or drunk, who use abusive language, or who rob people will not inherit the kingdom of God.2”

Is there any Gospel in all of this? There is. One example is to look at the LWML, the Lutheran Women’s Missionary League, who give generously of their blessings to empower and lift up so many around the globe. Investing in those whom many others would discard. Endowing encouragement and energy into those whom others would leave broken and forgotten. Lifting up those upon whom others would look down. The LWML is a very positive example of the very opposite of a thief. They give, mostly in secret, following God’s Sacred Word. Hear what I says:

When you give to the needy, do not let your left hand know what your right hand is doing, so that your giving may be in secret. And your Father who sees in secret will reward you.3

There is more ‘Gospel’ in this Commandment, more ‘grace of God.’ In that Jesus seems to go out of His way to associate Himself with thieves. If there was anyone in Jesus’ day who was guilty of breaking the 7th Commandment it was tax collectors. Tax collectors were notorious for cheating and overtaxing people. Yet Jesus is constantly accused of not only associating with them but He even ate with them.

One such tax collector was a man named Zacchaeus. The children are going to learn about him next week in Sunday School. Zacchaeus was a ‘chief tax collector.’ One day, Jesus invited Himself to Zacchaeus’ house to eat dinner with Him. At that meal Zacchaeus’ life was forever changed. Just listen this “chief thief,” whose very life was breaking the 7th Commandment, after Jesus Christ came into His life.

Behold, Lord, the half of my goods I give to the poor. And if I have defrauded anyone of anything, I restore it fourfold.

What joy Jesus must have had in saying, “Today salvation has come to this house.4” That is the very pinnacle reason Jesus says:

What are you willing to trade for your salvation? Will you abandon your soul to Sheol6 for fortune and fame, for status and title, for position and power. What if you get them all? Listen to Jesus:

What will it profit a man if he gains the whole world and forfeits his soul? What shall a man give in return for his soul?

The Son of Man is going to come with His angels in the glory of His Father, and then He will repay each person according to what he has done.7

Jesus has come into the world for ‘thieves.’ ‘Thieves’ like, Zacchaeus, like Augustine, like anyone who has stolen a pen or paperclip, reputation or truth, money or goods. Jesus comes here to eat a meal with us, in a very special Meal of His own body to eat, and blood to drink, given and shed for ‘thieves,’ for our forgiveness, for our repentance, for His joy.

“We should fear and love God so that we do not take our neighbor’s money or possessions or get them in any dishonest way, but help him to improve and protect his possessions and income.”

May this be the direction and ordering of our life. In Jesus’ name.

6‘Sheol’ is an Hebrew word that means: Death, Hell, condemnation and judgment from God.