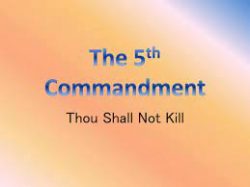 Open please your Catechisms to p. 85 and your Bibles to Matthew 25. It might also be helpful to keep a place marked at Colossians 3.

Y ou know what the first recorded murder, in the Bible, is. It’s when Cain, the first son of Adam and Eve, killed his brother Able. Cain did that because He was doing things that did not please God, while Able was pleasing God. Cain in a jealous rage killed his brother.

You shall not murder.
What does this mean?
We should fear and love God so that we do not hurt or harm our neighbor in his body, but help and support him in every physical need.

We might think this is a commandment we can ignore. No one here is going to kill someone. Right? No one who goes to church would do something like that. Right?

We never know when the specter of Cain and Able will show itself. Yet we know it happens all the time. It’s not always with rock, knife or gun. Sometimes it’s with the tongue, in gossip and lies, but killing is killing, be it someone’s life or reputation.

We never know when the specter of Cain and Able will show itself. Many of you have probably heard of Jeffery Dahmer, but how many of you know he was raised in a Lutheran Church?

We never know when the specter of Cain and Able will show itself. I wonder if any of you remember ‘The BTK killer.’ He would tie people up, torture them, and then kill them. He was a leader in his Lutheran congregation when he was arrested for murder.

It’s one thing to break God’s Laws when you don’t know what you are doing, but isn’t it worse when you do know and do it anyway? Yet we know it happens all the time. It’s not always with rock, knife or gun. Sometimes it’s with the tongue, in gossip and lies, but killing is killing, be it someone’s life or reputation.

Here’s another question: How many people do you know that could name all ten Commandments? If I stopped right now and asked everyone to write them down, how many remember all ten? The truth is most people, even people who go to church regularly, can not do that.

My point is: there is one Commandment that everybody remembers. That is, “Do not kill.” That one Commandment seems to be the one most clearly written on the hearts and minds of all people. That is the one everyone remembers.

Martin Luther explained the Commandment this way (on page 85):

We should fear and love God so that we do not hurt or harm our neighbor in his body, but help and support him in every physical need.

What about the second part of that explanation? That part that says:

…but help and support him in every physical need.

I asked you to put a marker at Colossians 3. Take look at verses 5-10

5 Put to death therefore what is earthly in you: sexual immorality, impurity, passion, evil desire, and covetousness, which is idolatry. 6 On account of these the wrath of God is coming. 7 In these you too once walked, when you were living in them. 8 But now you must put them all away: anger, wrath, malice, slander, and obscene talk from your mouth. 9 Do not lie to one another, seeing that you have put off the old self with its practices 10 and have put on the new self, which is being renewed in knowledge after the image of its Creator.

There is a better way. We were made in the “image and likeness of God.1” The saved should reflect that image of God.

What about when people show up at church asking for money? What about people who are truthfully hungry or have no place to live? What if they are asking for gas money to get home. If we say, “I’ll pray for you, have a nice day” are we obeying or breaking this Commandment?

I think the answer to that questions sounds easy, but it’s not. Not really. Suppose someone comes to church asking for money to put gas in their tank so they can get home. I invite them into my office to ask the some questions. Questions like: “How did you plan to get back home when you left there?” “What happened to the money you had?” “What brought you here?” “How did you get into this situation?”

Sometimes people have a legitimate answer. In that case we help them. Sometimes people have wasted their money, and then come to the church to get more money so they can get home. Should we give money to those people? Are we really helping and supporting them, or would it be more helpful to let them suffer a little, endure a little pain, so they realize they have a problem if they spend so much they can’t get home?

There are many ways to help people. Sometimes the best help is not to help. It requires some wisdom,2 some life experience, to know the difference. It’s not always easy. Yet, in all that we do, we should listen to Jesus’ words. Flip back to Matthew 25, and let’s take a look at why this matters. Jesus said:

34 The King will say to those on His right, ‘Come, you who are blessed by My Father, inherit the kingdom prepared for you from the foundation of the world. For I was hungry and you gave Me food, I was thirsty and you gave Me drink, I was a stranger and you welcomed Me, I was naked and you clothed Me, I was sick and you visited Me, I was in prison and you came to Me.’

You see the Commandment: Do not kill, has to do with a lot more than just murder. It has to do with helping and supporting the people who live around us. Could not that same points Jesus made include defending those who find themselves hung out on the gossip vine?

Whoever goes about slandering reveals secrets,
but he who is trustworthy in spirit keeps a thing covered.

We do that because of what Jesus did for us. Jesus left His glorious throne, so that He could come here, walk in the mud and save us. He is our Brother, as well as our Savior and King.

R emember what I said before? “We never know when the specter of Cain and Able will show itself.” Cain killed his brother. We killed our Brother, Jesus, on a cross, with our sins.

In all these things, and more, we seek forgiveness knowing that our Lord hears our prayer, knowing that our Lord is willing, even eager, to forgive us who are: murdering, meandering, mean people. Then bathing in Baptismal grace, we seek to live as God would have us live. As a constant example of Christian kindness and grace to all who seek that same forgiveness we have already received.