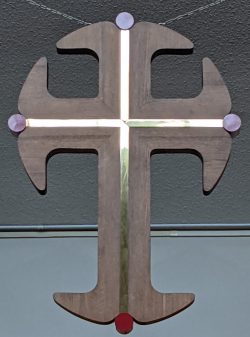 From Mount Hor they set out by the way to the Red Sea, to go around the land of Edom. And the people became impatient on the way. And the people spoke against God and against Moses, “Why have you brought us up out of Egypt to die in the wilderness? For there is no food and no water, and we loathe this worthless food.” Then the Lord sent fiery serpents among the people, and they bit the people, so that many people of Israel died. And the people came to Moses and said, “We have sinned, for we have spoken against the Lord and against you. Pray to the Lord, that he take away the serpents from us.” So Moses prayed for the people. And the Lord said to Moses, “Make a fiery serpent and set it on a pole, and everyone who is bitten, when he sees it, shall live.” So Moses made a bronze serpent and set it on a pole. And if a serpent bit anyone, he would look at the bronze serpent and live.

The word of the cross is folly to those who are perishing, but to us who are being saved it is the power of God. For it is written,

“I will destroy the wisdom of the wise,
and the discernment of the discerning I will thwart.”

Where is the one who is wise? Where is the scribe? Where is the debater of this age? Has not God made foolish the wisdom of the world? For since, in the wisdom of God, the world did not know God through wisdom, it pleased God through the folly of what we preach to save those who believe. For Jews demand signs and Greeks seek wisdom, but we preach Christ crucified, a stumbling block to Jews and folly to Gentiles, but to those who are called, both Jews and Greeks, Christ the power of God and the wisdom of God. For the foolishness of God is wiser than men, and the weakness of God is stronger than men.

Now among those who went up to worship at the feast were some Greeks. So these came to Philip, who was from Bethsaida in Galilee, and asked him, “Sir, we wish to see Jesus.” Philip went and told Andrew; Andrew and Philip went and told Jesus. And Jesus answered them, “The hour has come for the Son of Man to be glorified. Truly, truly, I say to you, unless a grain of wheat falls into the earth and dies, it remains alone; but if it dies, it bears much fruit. Whoever loves his life loses it, and whoever hates his life in this world will keep it for eternal life. If anyone serves me, he must follow me; and where I am, there will my servant be also. If anyone serves me, the Father will honor him.

“Now is my soul troubled. And what shall I say? ‘Father, save me from this hour’? But for this purpose I have come to this hour. Father, glorify your name.” Then a voice came from heaven: “I have glorified it, and I will glorify it again.” The crowd that stood there and heard it said that it had thundered. Others said, “An angel has spoken to him.” Jesus answered, “This voice has come for your sake, not mine. Now is the judgment of this world; now will the ruler of this world be cast out. And I, when I am lifted up from the earth, will draw all people to myself.” He said this to show by what kind of death he was going to die.