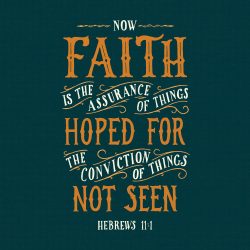 Thus says the Lord of hosts: “Do not listen to the words of the prophets who prophesy to you, filling you with vain hopes. They speak visions of their own minds, not from the mouth of the Lord. They say continually to those who despise the word of the Lord, ‘It shall be well with you’; and to everyone who stubbornly follows his own heart, they say, ‘No disaster shall come upon you.’”

For who among them has stood in the council of the Lord
to see and to hear his word,
or who has paid attention to his word and listened?
Behold, the storm of the Lord!
Wrath has gone forth,
a whirling tempest;
it will burst upon the head of the wicked.
The anger of the Lord will not turn back
until he has executed and accomplished
the intents of his heart.
In the latter days you will understand it clearly.

“I did not send the prophets,
yet they ran;
I did not speak to them,
yet they prophesied.
But if they had stood in my council,
then they would have proclaimed my words to my people,
and they would have turned them from their evil way,
and from the evil of their deeds.

By faith Abraham, when he was tested, offered up Isaac, and he who had received the promises was in the act of offering up his only son, of whom it was said, “Through Isaac shall your offspring be named.” He considered that God was able even to raise him from the dead, from which, figuratively speaking, he did receive him back. By faith Isaac invoked future blessings on Jacob and Esau. By faith Jacob, when dying, blessed each of the sons of Joseph, bowing in worship over the head of his staff. By faith Joseph, at the end of his life, made mention of the exodus of the Israelites and gave directions concerning his bones.

By faith Moses, when he was born, was hidden for three months by his parents, because they saw that the child was beautiful, and they were not afraid of the king’s edict. By faith Moses, when he was grown up, refused to be called the son of Pharaoh’s daughter, choosing rather to be mistreated with the people of God than to enjoy the fleeting pleasures of sin. He considered the reproach of Christ greater wealth than the treasures of Egypt, for he was looking to the reward. By faith he left Egypt, not being afraid of the anger of the king, for he endured as seeing him who is invisible. By faith he kept the Passover and sprinkled the blood, so that the Destroyer of the firstborn might not touch them.

By faith the people crossed the Red Sea as if on dry land, but the Egyptians, when they attempted to do the same, were drowned. By faith the walls of Jericho fell down after they had been encircled for seven days. By faith Rahab the prostitute did not perish with those who were disobedient, because she had given a friendly welcome to the spies.

And what more shall I say? For time would fail me to tell of Gideon, Barak, Samson, Jephthah, of David and Samuel and the prophets— who through faith conquered kingdoms, enforced justice, obtained promises, stopped the mouths of lions, quenched the power of fire, escaped the edge of the sword, were made strong out of weakness, became mighty in war, put foreign armies to flight. Women received back their dead by resurrection. Some were tortured, refusing to accept release, so that they might rise again to a better life. Others suffered mocking and flogging, and even chains and imprisonment. They were stoned, they were sawn in two, they were killed with the sword. They went about in skins of sheep and goats, destitute, afflicted, mistreated— of whom the world was not worthy—wandering about in deserts and mountains, and in dens and caves of the earth.

And all these, though commended through their faith, did not receive what was promised, since God had provided something better for us, that apart from us they should not be made perfect.

Therefore, since we are surrounded by so great a cloud of witnesses, let us also lay aside every weight, and sin which clings so closely, and let us run with endurance the race that is set before us, looking to Jesus, the founder and perfecter of our faith, who for the joy that was set before him endured the cross, despising the shame, and is seated at the right hand of the throne of God.

Consider him who endured from sinners such hostility against himself, so that you may not grow weary or fainthearted.

[Jesus said:] “I came to cast fire on the earth, and would that it were already kindled! I have a baptism to be baptized with, and how great is my distress until it is accomplished! Do you think that I have come to give peace on earth? No, I tell you, but rather division. For from now on in one house there will be five divided, three against two and two against three. They will be divided, father against son and son against father, mother against daughter and daughter against mother, mother-in-law against her daughter-in-law and daughter-in-law against mother-in-law.”