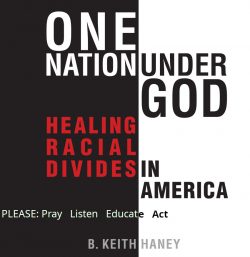 Grace to you, and peace, in Jesus’ name. Amen.

We’re in this series: One Nation under God. I really believe this can be a real blessing, to not just our congregation, but our whole community. When we start seeing each other as “Us” not “Us vs Them” when we see ourselves as:

a great multitude that no one could number, from every nation, from all tribes and peoples and languages, standing before the throne and before the Lamb…1

who are one nation under God. When we start to see each other that way the world will be a better place for all of us. We’re not there yet. True, real, factual and actual Christian love is needed. It is on display by some, but some is not enough. It should be from all of us, from the whole nation.

The song we just sang, “We are One in the Spirit” says:

That is the only answer. All the might and wisdom of the human race, detached from Jesus, cannot produce anything that will heal this divide which Satan has concocted. To defeat the devil on this point will require some steps.

A s we walk through this series we’ve look at some already. The first we looked at was how sin distorts our identity. Because of sin we forget who we are. We talked about “Us” vs “Them” seeing the world as divided, when we really need to be seeing everyone as “We” with “Me.” It is Satan who is the sowing seeds of division and dissension. He is the “prince of this world2” who wants to destroy this world. The world that God loves so much that “He gave His only Son3” to save the whole world.

T wo weeks ago we talked about putting on the full armor of God:4 the breastplate righteousness, the belt of truth, the shield of faith, all so we are ready to be the ones who bring peace, carrying the sword of the spirit God which is His Holy Word. In this image we are people getting ready. We are a nation on the move for a purpose. We must stand shoulder to shoulder, side by side, against the enemy,

so that we would not be outwitted by Satan;
for we are not ignorant of his designs.5

That is the purpose for which the armor of God is to be used. Not just for me to protect myself, but us as we to protect each other. Satan distorts our identity. It is he who is the real enemy.

L ast week we saw that, as we looked at the Good Samaritan. You recall the man was beaten and left by the side of the road, and the priest and the Levite walk on the other side. It was the Samaritan, the “worthless” one, the foreigner, the rejected one, who stopped to help.

This was his enemy. That Samaritan is not just helping somebody on the side of the road who’s in trouble. This man lying there sees him as the other side, the enemy, as “Those people” and yet he (one of “Those people”) is the one who heals his wounds, put him on his donkey, takes to an inn, and says whatever it costs take care of this man. More than that he says if there’s anything more than I’m giving you right now (2 days income) I’ll take care of that when I come back.

What caused that division back in those days? We could point at all sorts of thing but all of those things are only symptoms. Who is the real enemy? Satan is the source. Who is my neighbor? That’s what we’re going to talk about today.

W e are one in Christ. The healing starts by building up the other side. That can be easier to say than to do. Thinking about all of us as one in Christ is hard sometimes because we look at the world through eyes that too often see: “you are with me or you are against me.”

they struggled with this kind of stuff. One of the main divisions was Jews versus Samaritans. How did Jesus act? Remember when Jesus talked to the woman at the well? When the disciples arrived they could not believe he was talking to a Samaritan, and further horror of horrors, a Samaritan woman. “You know what they’re like!” (…and she was… like that.)

T he other main division was Jews versus Gentiles. The first major dispute in the Church was over the requirement of circumcision. Some wanted the requirements of the Old Testament to remain in affect to be followers of Jesus. Others wanted to maintain the dietary laws to be acceptable in the kingdom of God?

With all of that going on look at the Gospel reading for today. A Roman soldier a centurions, a commander of 100 solders, comes to Jesus and says, “one of my servants is suffering.” He no doubt had heard about Jesus. Jesus did miracles from the very beginning of His ministry. Folks in Capernaum would regularly bring people when Jesus was coming through town. They would regularly bring people to be healed.

They brought them from all over the region to receive healing. Then here comes a Roman soldier. He must have heard about this, and after I suppose trying everything medicine could do, he comes and asks, “Lord, my young servant lies in bed paralyzed in a terrible pain” Jesus said, “Okay, I’ll come and heal him.”

Jesus jumped over the divide. You need to know that the divide is much bigger than we understand. When Jesus said this the Centurions says, “Don’t come to my house. I know You can just say the word and he’ll be healed.”

You see if Jesus went into his home He would be ceremonial defiled and the soldier knew exactly what Jesus would have to go through to get cleansing after He’d been into the home. Jews would not step over the threshold of a Gentile home. When they came back from the marketplace they washed themselves ceremonially, because they might have touched a Gentile. “Don’t come to my house. Just say the word and my servant will be healed.”

Jesus looks around and says, “In all of Israel I have not seen this kind of faith. You guys don’t believe like this guy does, and he’s not one of us. I tell you this, that many gentiles will come from all over the world from the East and the West and sit down with Abraham, Isaac and Jacob at the feast of the Kingdom of Heaven.”

Jesus said this to give you hope. Jesus is saying, “There is no division. You make divisions. I don’t make the division. I’ve got the whole world in My hand.” Then Jesus said to that officer, “Go back home. Because you believe, it is happening.” The young man was healed that very same hour.

What happens when we see divisions and we live in divisions? What is Jesus trying to tell us? It is the cross that erases all those divisions. I’m not divided from the people that I am going to be sitting next to in heaven. The Lutheran Church Missouri Synod will not be the only collection of people in heaven. There will be plenty of others. Some find that hard to believe.

When on the cross Jesus broke down the wall of hostility that separated us. He made peace between Jews and Gentiles by creating itself one new people, from two groups has God created one.7

We are all children of God through faith in Jesus, together as one body. Jesus reconciled all people to God by His death on the cross. Our hostility toward each other has been put to death. It is no longer “Us” and “Them.” There is a different structure that God is teaching us. Only God can make the changes in the “me and the we” necessary for healing to happen in America.

It is not going to be a political party. You cannot vote unity into existence. Only God can make us:

…one nation under God,
indivisible
with liberty and justice for all.

So what we need to do is let God make the change. We love people in Jesus because Jesus changes everything. He can even rescue this nation from itself, and the destructive path upon which we have set ourselves.

T hat is what Saint Paul is trying to tell us. We’re all children of God through faith in Christ Jesus. We have been united with Christ in Holy Baptism. Everyone has put on Christ. It’s like, putting on new clothes. So there is no longer Jew or Greek, no slave or free, male or female. We are all one in Christ.

Maybe for you to pray about that can be tough because it’s strikes at the heart of the matter. If we looked at each other like “Us” instead of “Us vs Them” what would be different about our situation? What if we acted more like brothers and sisters, the one Body, the one Church, the one people, the one nation under God. The nation whom He made us to be, in Jesus. What if we stop talking about “Them” and see them as “Us.”

Jesus is the one who needs to bring healing. Healing our hearts, reminding us: